Delta Force Paintball Suffolk sits on 36 acres of farmland, surrounded by the gorgeous Suffolk countryside. A perfect setting for paintball fans looking for an attractive backdrop to their game.

The Suffolk Paintball Centre has open-air battlefields and forested areas, complete with purpose built fox holes, bunkers and even a tiny village! Game zones consist of, ‘The Airstrip’ (on an open field with downed helicopters and aeroplanes); ‘The Ammo Dump’ where you’re given the task to either attack or defend a heavily protected ammo dump, and the centre’s new game, ‘Sup Air Field’, which involves a fast and furious game of speedball. 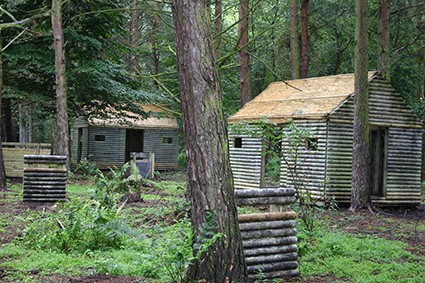 Speedball is one of Delta Force’s most popular games, ever since it was first unveiled back at the beginning of the 80s. So, what makes it so popular? It’s high-adrenaline and fast paced action played out in close proximity is definitely a thrill. One team is required to occupy a structure (i.e. the ammo dump) and needs to protect it for a period of 10 minutes. The aim for the opposing team is to attack the enemy’s defence line and escort a fake bomb into the centre of the structure, or raise the flag before the time runs out! 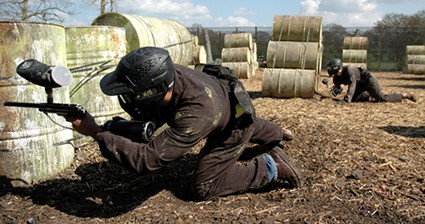 A helpful paintballing tactic for ‘attacking’ is to surround the enemy (by getting your team to move in from every direction while remaining spaced out). Or you could try using decoys (once you’ve decided to make a run for the flag – send out a few other players who are quick to try and distract the opposition from the real threat!). Another tactic is to simply keep up the covering fire, so that the defending opposition have to keep their heads down for the first 5 minutes of the game when they can’t leave the structure). And make good use of the ‘respawn’ rule, when players are given infinite lives for the first 5 minutes of the game.

A useful tactic for ‘defending’ is to be aggressive! The defending team are always going to have the advantage at the beginning, so play hard and stop them from completing their task! Another tactic to try is to keep on the offensive; take advantage of the fact you have to remain on the structure for the initial 4 minutes and work with your teammates to defend!). The last helpful tip is a simple one: spread out – it’s the most effective way to maintain a rock-solid defence!

If you’d like to find out more about Delta Force Paintball Suffolk or to book your paintball event with us, simply call 0844 477 5115*