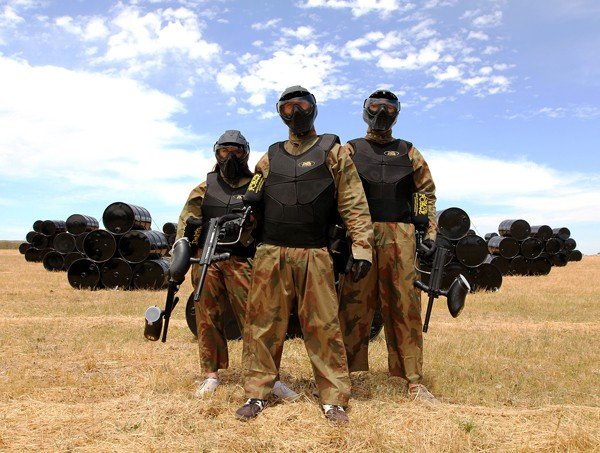 Paintball originated in the early 1980s in Canada and the USA and initially was a game that was played between two teams on woodland fields. In 1987 at Wolfslair in the USA a new game format was tried and instead of playing on woodland fields, a purpose made arena was made outside with manmade barricades instead of trees. This came to be known as Speedball and started a craze that swept the world. In 1989 a charity paintball event was held in Britain to raise money for Great Ormond Street Hospital and this speedball format was first introduced to the UK during that tournament. This concept has been adapted and changed over the years by the addition of inflatable barricades, but in essence today’s modern paintball tournaments still use the original speedball concept.

The first Delta Force speedball arena was installed at our paintball centre in Cobham, Surrey in 1991. The arena concept is simple: it’s a clear area of ground with manmade cover provided by stacks of oil drums. There is nowhere to run and nowhere to hide in the arena and as a result it is an intense and adrenalin packed game to participate in.

The mission in this game zone is as simple as it gets: shoot out all opposing players before they shoot you! It’s total annihilation! The team who eliminates all members of the opposition wins the game. Once a team player has been eliminated they must make their way off the field and assemble in the designated dead zone.

The game will last for 15 minutes with a brief break out on the field before the second round starts. Please ensure you take enough ammunition with you to last for two games as you will not return to the safe area in between the two games.

Once the games have been played with both teams taking turns starting from either end, we will return to the safe zone for a longer break prior to the next playing zone.