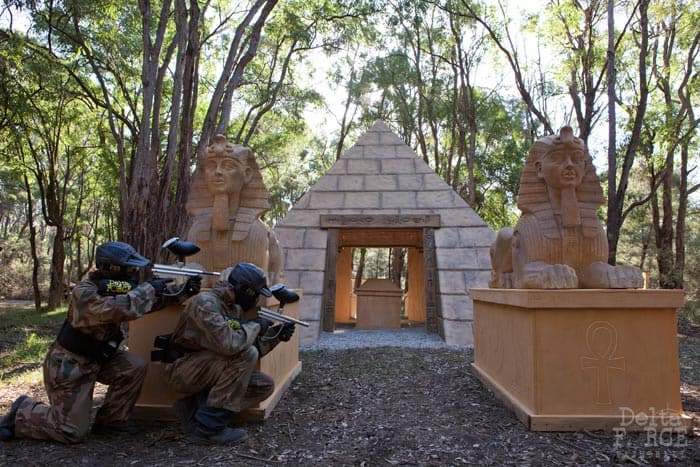 Deep in the Egyptian forest a band of raiders are looting each tomb they come across taking ancient artefacts they find along the way. However, the native tribes’ fearless warriors have banded together to combat the raiders head on and protect their last precious ancient idol.

The NATIVES early detection scouts have picked up the trail of the RAIDERS and have fortified the last pyramid and hidden the idol within the pyramids gaze, the NATIVES begin within the confines of their pyramid. The Natives must simply stop the RAIDERS from capturing the IDOL and fleeing their lands. The RAIDERS must fight their way across the pyramids grounds and take the IDOL before safely fleeing to their waiting helicopter at the extraction point.

The boundaries for the game zone are marked with yellow rope and both teams must remain within the zone at all times while in play. RAIDERS, once shot, can return to their start point to renter the game. NATIVES have only one life.

Once you are eliminated from the game you will need to make your way to the dead zone, which will be pointed out by the marshals at the start of the game.

Both colour teams will play the roles of each opposition force. This typically two round battle usually involves 40 minutes of paintball action.