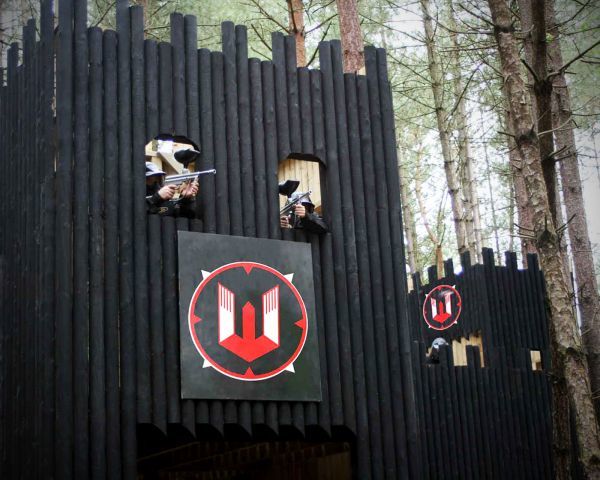 It is 1943 and the German high command has tasked their top scientists with making the ultimate weapon. The top secret research lab is deep within the dungeons of Castle Wallenberg. Intelligence has indicated that this research is nearing completion. The Allied Command has gathered a band of Commandos who must now stage a daring mission to storm the castle and destroy the lab. Standing in their way are the handpicked German Guards and the formidable defences of the castle. The Commandos will need to be organised and strike quickly if they are to take the Guards by surprise. The Guards will need to hold the Commandos off until reinforcements arrive.

The Commandos start the game from a base within the forest south of the castle. The Guards start within the castle walls. The Commandos have to make their way up to the front of the castle where they will have to retrieve the flag from the starting point, just in front of the main castle entrance. Once the flag has been captured it must be taken to the flagpole, clipped on and raised, this signals that the explosives have been placed and the castle labs can be blown up.

The Guards must simply stop the Commandos raising the flag.

The Guards team cannot touch the flag at any time during the game.

The Commando team has unlimited lives and once they have been shot they are able to re-spawn back at the Commando start base in the forest. The re-spawn point is marked with a bright yellow barrel. By touching the barrel the Commando team player is able to rejoin the assault on the castle. The Guards only have one life and once eliminated they must make their way off the playing field and assemble in the designated dead zone.

The game will last for 15 minutes with a brief break out on the field before the second round starts. Please ensure you take enough ammunition with you to last for two games as you will not return to the safe area in between the two games. Once the games have been played with both teams taking turns at being Commandos and Guards, we will return to the safe zone for a longer break prior to playing the next game zone.