The Paintball Geeks Are Back With A Big Bang

Yes the geeky, socially challenged guys are back. The new season of Big Bang Theory started yesterday (22/09/11) over in America and is set to air today over here in the UK.

For those of you who haven’t watched the show before, it’s about two roomates called Sheldon and Leonard, who are 2 super-geek genius physicists, who can explain the origins of the universe with the ease of reciting the alphabet, but struggle to relate to the normal common sense world around them, especially girls..!!..

This makes for hilarious viewing especially when their neighbour Penny a waitress repeatedly makes them look like absolute bafoons using pure common sense, while they try to use Einsteins formulas to perform simple tasks like opening doors.

The first episode kicks off with a bangs and splats as the gang head out to play one of their favourite sports paintball. 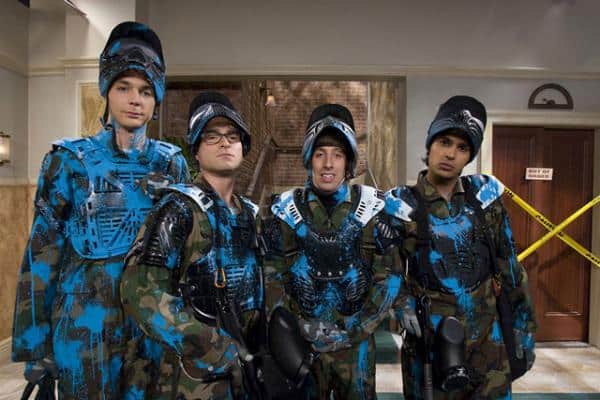 I can’t wait to watch it, I can just imagine Sheldon and Leonard standing in front of the Paintball Terminator with a calculator trying to adjust for the gravitational pull from the moon before they take the shot, all the while getting sprayed with 100’s of paintballs by the opposition.

If you’ve studied science, or have any geeky friends who try to apply Newtons Laws of Motions to something as mundane as picking their noses you’ll love this show.

If you’re inspired to re-create some of their physics calculations down at your nearest paintball centre, bring down your protractor, compass and calculator and we’ll issue you with all the gear and a paintball gun.