It was a case of Gunners by name, Gunners by nature this weekend at Delta Force Paintball, with the full Arsenal Squad enjoying an innovative preparation for their crucial FA Cup tie.

Unai Emery led his players in a special team building session with a view to galvanise the players heading into the business end of the season.

The lads particularly enjoyed Delta Force’s immersive scenarios including D-Day Landing and Speed Ball. Paint Grenades were flying left, right and centre with an all-out assault on victory. The competitive streak runs deep at Arsenal with bragging rights up for grabs.

Emery and his coaching staff, along with the first and second teams, thanked Delta Force for a fantastic day that will long be remembered. 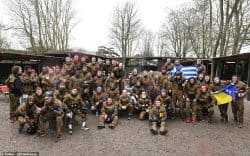