The sun is shining, the newspapers are full of Andy Murray-isms and Sue Barker’s face is permanently on your television screen. It can only mean one thing – WIMBLEDON 2015!

As Scotland’s finest baller smashes his way towards Sunday’s final, it got us thinking. What would the world’s greatest tennis tournament be like if it was played paintball style?

This awesome video should give us an idea...

Don’t worry, all Delta Force Paintball Centres provide state of the art paintball equipment, including combat suits and full US spec head protection, so the face painting can wait until the evening!

For decades Wimbledon and strawberries have gone hand in hand, but we think it’s about time the British public were treated to another delicious dish. Introducing paintballs and cream! It may not sound appetising, but we figured if Heston Blumenthal can fuse ice cream with liquid nitrogen then this should be fine! Right? 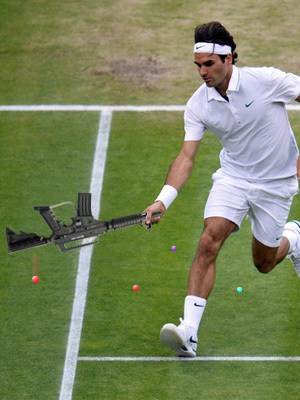 Simply call one of our friendly event coordinators 24/7 on 0844 477 5115*. Your action packed paintball day will be booked in no time! Alternatively you can visit our booking page to request a call back.